Our legislative session in Albany is over and I wanted to provide you with an update on some of the bigger items at the Capitol and in the district from the last 30 days.

After a week-long extension, the legislative session has wrapped up in Albany. Session was originally scheduled to finish on June 17th, but with several unfinished items the Assembly and Senate remained at the Capitol until June 25th when a package of legislation was passed by both houses. While some of the larger items included in the package were centered on downstate, our area will see some impact in the form of a property tax rebate program worth $3.1 billion over the next four years. While I continue to advocate for more systemic changes to our property tax system, many of my colleagues prefer sending out rebate checks.

The rebates will be provided in addition to a homeowner’s School Tax Relief (STAR) benefits and are contingent upon schools and municipalities staying within the 2 percent property tax cap. After the first year, the program will operate similar to the “circuit breaker” proposal long supported by the Assembly, where the amount of the rebates will be based on a household’s annual income for families earning up to $275,000. For more information on how this plan will operate, click here to read an article from Gannett’s Jon Campbell.

The State’s two-percent property tax cap program was also extended for an additional four years which will help control local taxes. The extension includes some changes that will provide relief for municipalities and school districts, such as exemptions for BOCES programs’ capital expenses as well as payments in lieu of taxes (PILOTs) agreements. This will help school districts and local governments make necessary investments for the future while staying within the tax cap.

Earlier this month, I was honored to be selected by my Senate and Assembly colleagues to serve as the Chair of the Legislative Women’s Caucus. A substantial number of women currently serve in the NYS Legislature and those numbers are continuing to grow. It is my goal as Chair of the Women’s Caucus to find issues that reach across party lines so that real solutions to the concerns of New York women can be addressed. The Legislative Women’s Caucus started in 1983 and is currently comprised of the 52 women elected to both houses of the Legislature (41 in the Assembly and 11 in the Senate). The group works closely with women’s organizations, state agencies and representatives, and other concerned stakeholders to advocate for programs and services of concern to women. The Caucus also works to improve the participation of women in all areas of government and provides a network of support for women in the Legislature. 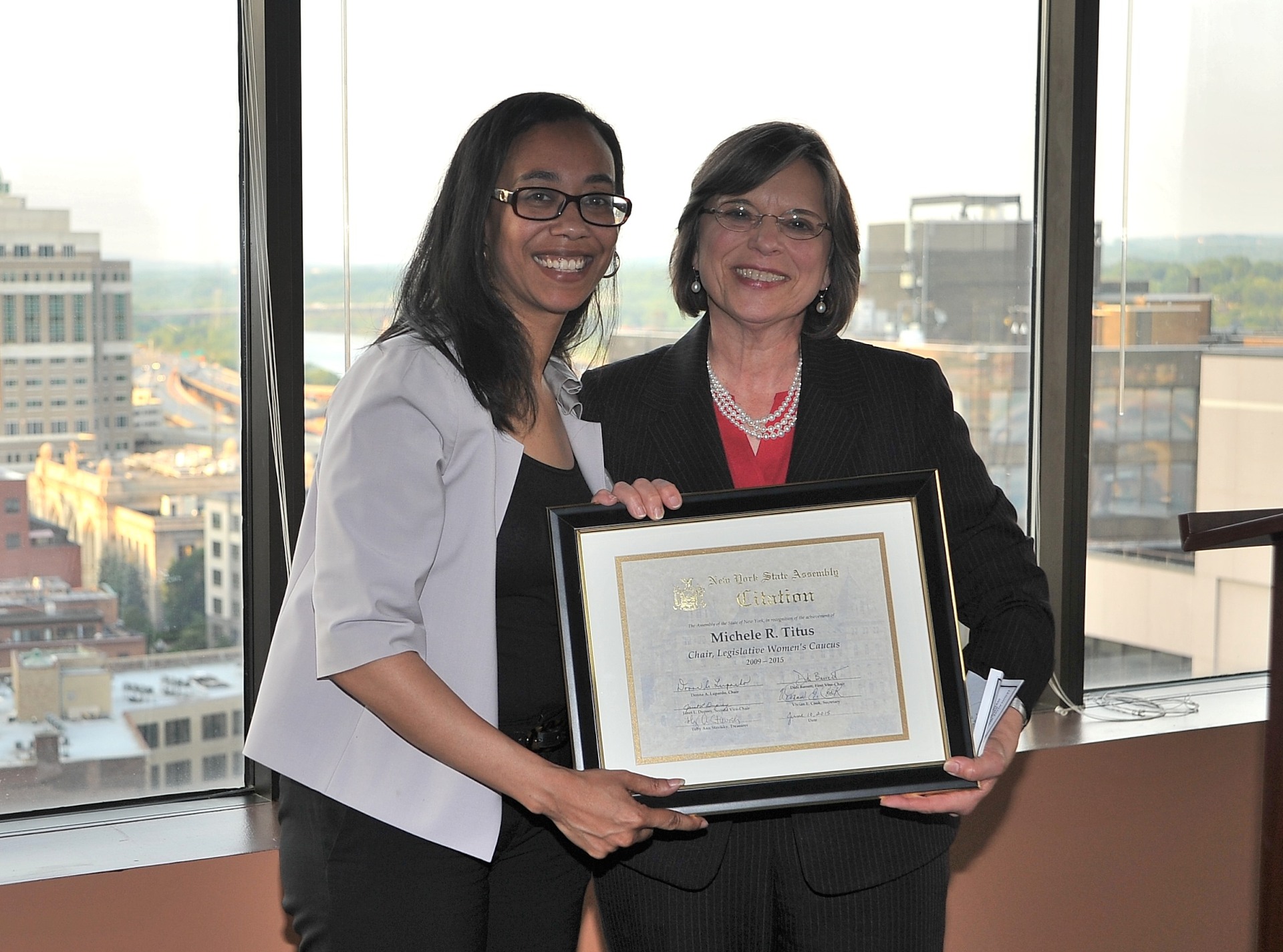 Assemblywoman Lupardo presents outgoing Chair Assemblywoman Michele Titus with a citation in honor of her dedication to the Women’s Caucus.

A number of bills I authored passed both houses of the Legislature prior to the end of session. Among the more notable pieces of legislation is a bill I worked on with Senator Libous that would ensure proper services are in place for developmentally disabled individuals prior to their integration into community settings. With the State’s planned closure of facilities such as the Broome Developmental Center, it’s crucial that residents of BDC and similar settings continue to receive the care and services they need.

Another bill that made it through both the Assembly and Senate will assist the blind in receiving the best care possible. A5451 would allow for vision rehabilitation professionals to be licensed by the State; without this licensing, access to VRPs is severely restricted and doctors do not refer patients to unlicensed professions. This bill will increase the access to these skilled professionals and as a result help blind and visually impaired individuals lead more independent lives.

These bills will now go to Governor Cuomo for consideration.

Our schools have always been one of my top priorities. It’s been obvious that curriculum and performance appraisal changes made by the state have not worked out well for students, teachers, parents and others. Throughout the session, we worked hard to amend certain reforms made over the last few years. Legislation passed this past month will help teachers better prepare students for certain standardized exams. The State Education Department will now be able to release significantly more past test questions and answers.  Also, teachers, principals and superintendents will no longer be required to enter into confidentiality agreements preventing them from discussing the contents of these exams after the exams have been publicly released.

The legislation would also improve teacher evaluations and student assessments by creating a content review committee to review standardized tests in grades 3 through 8 in English language arts and math to ensure these tests are fair, accurate and appropriate for each grade level; and taking into account factors such as poverty, English Language Learner (ELL) status, students with disabilities and prior academic history when measuring student growth under the new teacher evaluation system.

After receiving a number of mailers and automated phone calls, many residents in my district called my office confused about the proposed Parental Choice in Education Act, more commonly known as the Education Investment Tax Credit (EITC). Many of my colleagues and I had concerns about who would truly benefit from this proposal given how it was structured. It appeared very few of my constituents would see any real benefit. In the end the EITC was not passed this session. However, $250 million in mandate relief for private schools was included as part of the final bill package passed on the last day of session. This money will help private schools with mandated state expenses; money that has been owed to them for some time.

At the beginning of the month, I spoke at a forum on industrial hemp in Chenango County. As you know, I authored a hemp research bill which will allow our area to take advantage of this emerging industry. This meeting brought farmers, industry experts, and residents together to learn more about this lucrative crop and the potential it offers for new economic opportunities in the Southern Tier.

Currently, the State Department of Agriculture and Markets is crafting the final regulations for this pilot program. Its draft guidelines raised many concerns from stakeholders, particularly provisions for security measures for growing. As a result, Senator Tom O’Mara (the Senate sponsor of the hemp research bill) and I sent a letter to the Commissioner of Agriculture and Markets asking for the regulations to be modified. We have received positive feedback from this communication and it appears these prohibitive restrictions will be lifted. The regulations should be ready this summer and seeds should be planted next spring. 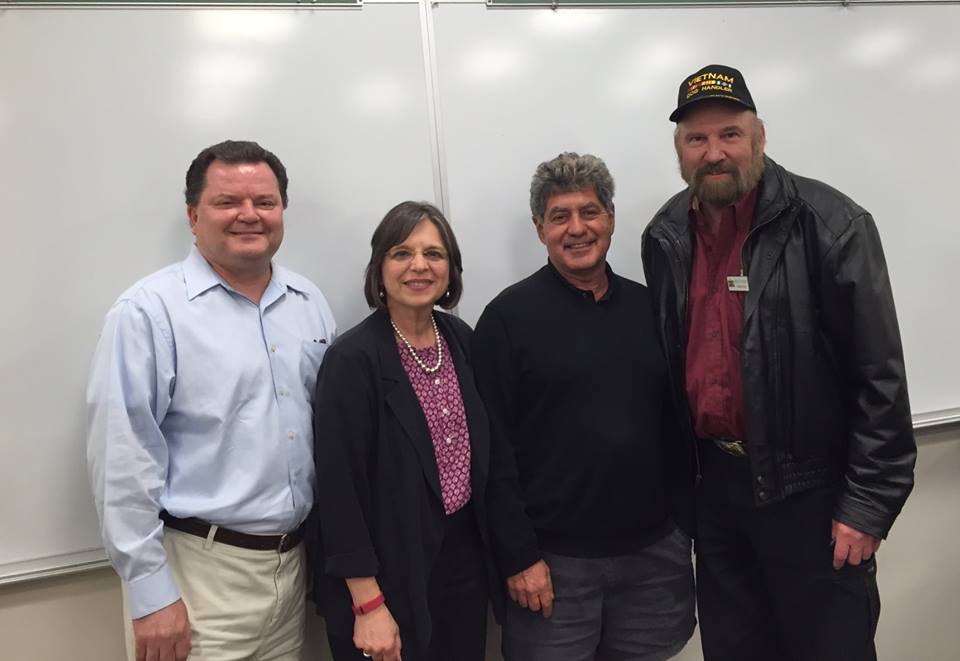