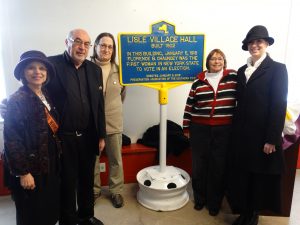 Frigid temperatures and blustery winds; the weather on Friday was eerily similar to the conditions a hundred years prior on the same date in the same place. The difference: the women at the old Village Hall in Lisle on January 5, 1918 were there to make history; the people that gathered on January 5, 2018 were there to celebrate it. Nearly 80 people packed inside the building Friday for a ceremony to unveil a historical marker in honor of the 100th anniversary of the first votes by women in New York State.

“The history of this building has been a well-kept secret,” said Roger Luther, Director of the Preservation Association of the Southern Tier. “Up until a few months ago, nobody knew what happened here.”

Two months after New York State voters gave women the right to vote in November of 1917, a group of women that would become known as the “Ladies of Lisle” rode a horse-drawn sleigh to the Village Hall in the northern Broome County township. At 6:10 AM on January 5, 1918, Florence B. Chauncey, the wife of a local minister, became the first woman to cast a ballot in a New York election.

“This is a very humbling experience for my family and I’m sure it would be for her as well,” said Jim Vollertsen, Chauncey’s grandson. “I mentioned to many people that we were traveling to Lisle to honor my grandmother and they were all awed by it and it’s really sinking in for me as well.”

Vollertsen and his sister Jan traveled from Rochester, along with their cousin Anne who came from Geneva to be in the same place their grandmother made history.

That history, however, was not made without conflict. Voters in Lisle that day in the winter of 1918 were deciding whether or not alcohol sales should be allowed in the town; a referendum on the same topic was defeated the previous year, but pro-liquor advocates challenged the outcome and another vote was granted. What the advocates did not anticipate was that women would be flooding the polls in January.

Before dropping her ballot in the box – an artifact that was brought out for Friday’s celebration – the owner of a local tavern, Orlando Burtis, spoke out against Chauncey and each woman who voted, knowing that all were part of the local temperance movement.

“Her vote was challenged, but she persisted,” Luther said. “As that ballot dropped from her hand into that box, history was made.”

The new historical marker was sponsored by the Preservation Association of the Southern Tier and the New York State Women’s Suffrage Commission. Friday’s event to unveil it was the latest in a yearlong celebration of the 100th anniversary of New York State suffrage.

“I continue to be amazed at how much interest there is in our local suffrage story,” said Assemblywoman Donna Lupardo, Co-Chair of the Broome-Tioga Suffrage Anniversary Committee and a member of the NYS Women’s Suffrage Commission. “In the process of celebrating the 100th anniversary of suffrage in NYS, we uncovered the pivotal role Broome and Tioga women played in the movement. We will continue to honor them in the coming months.”

The sign will be installed outside the Main St. building when the ground thaws in the spring and will alert travelers through the small town that history was made there.