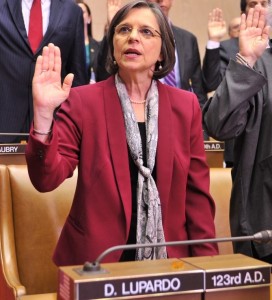 (ALBANY, NY) – On the first day of New York’s legislative session, Assemblywoman Donna Lupardo was sworn in for her sixth term in office. The Endwell democrat, who ran unopposed in November’s election, has represented residents of the City of Binghamton and the Towns of Union and Vestal since 2005. She currently serves as the Chair of the Assembly Committee on Children and Families.

“It’s an honor and privilege to represent the people of the 123rd Assembly District for another term,” Lupardo said. “In the last decade, we’ve seen substantial growth at Binghamton University and SUNY Broome, along with an increase in the number of small businesses opening in our urban core. But that progress has not reached everyone. We have to build and diversify our economy, so that more people can go back to work. Attracting new residents and encouraging current residents to stay remains one of our biggest challenges.”

Lupardo’s plans for economic diversification include further development of agriculture and niche markets; as well as an increase in high-tech and other types of manufacturing, including food processing. She also plans to work on a package of Southern Tier infrastructure improvements that will help create construction, energy retrofitting and other jobs.

The Assemblywoman still has many unanswered questions regarding the future of the Broome Developmental Center and its residents and employees.

“I will continue pressing for answers regarding safe placement of residents in the community, overall capacity in the statewide system, and job security for the current workforce,” she said.

In the coming weeks, as the Governor outlines his budget proposal, Lupardo will continue advocating for fair, equitable funding for local schools, early childhood learning initiatives, infrastructure improvements, and ethics and campaign finance reform in Albany.