1. SEVERAL WAYS TO VOTE IN THIS YEAR’S ELECTION:

There are several ways you can cast your ballot this year.  Any New Yorker can request an absentee ballot by selecting the “temporary illness” option due to the pandemic. You can request your ballot at any time and they can be mailed back as soon as you complete it. You can also drop off your completed ballot at the Broome County Board of Elections or any early polling site. The last day to request an absentee ballot is October 27th. Additionally, the last day to register to vote in this year’s election is October 9th.

Polling sites for early voting will be open for nine days, starting October 24th and ending November 1st.  You can vote early at the Broome County Library in Binghamton, the Oakdale Mall in Johnson City, and the George F. Johnson Memorial Library in Endicott. The full early voting schedule can be found here.

Polls will also be open for traditional hours, 6:00 AM – 9:00 PM, on Tuesday, November 3rd.  If you do vote in person, COVID-19 safety measures will be in effect; masks and social distancing will be required. If you have any questions on voting this year, you can contact my office or the Broome County Board of Elections at 607-778-2172. Please be sure to vote, and vote safely!

2. JOINING LOCAL ENVIRONMENTAL GROUPS TO CALL FOR AN EIS FOR ENDICOTT BATTERY FACILITY:

The proposed lithium-ion battery recycling plant in Endicott has received a lot of attention over the last several months, and rightfully so. I’ve heard from many constituents who are concerned about the proposed SungEel MMC facility being planned for a part of our community with a history of industrial pollution. Earlier this year, I asked the DEC if they would conduct an Environmental Impact Statement (EIS) on the project and was informed that one was not needed. As community advocates continued to voice their concerns, I was consulting with industry experts, local environmentalists, and others on the proposed recycling process.

I also raised many questions in a letter to the DEC Commissioner in May, including one about the presence of PFAS in these batteries. Concerns about PFAS eventually caused the Air Permit to be rescinded pending additional information. On September 21st, I joined the Binghamton Regional Sustainability Coalition, Sierra Club, and No Burn Broome to officially call on the DEC to conduct a full EIS on the SungEel project. While I support much-needed economic development in this area, there are many questions that remain unanswered. To read more, click here. 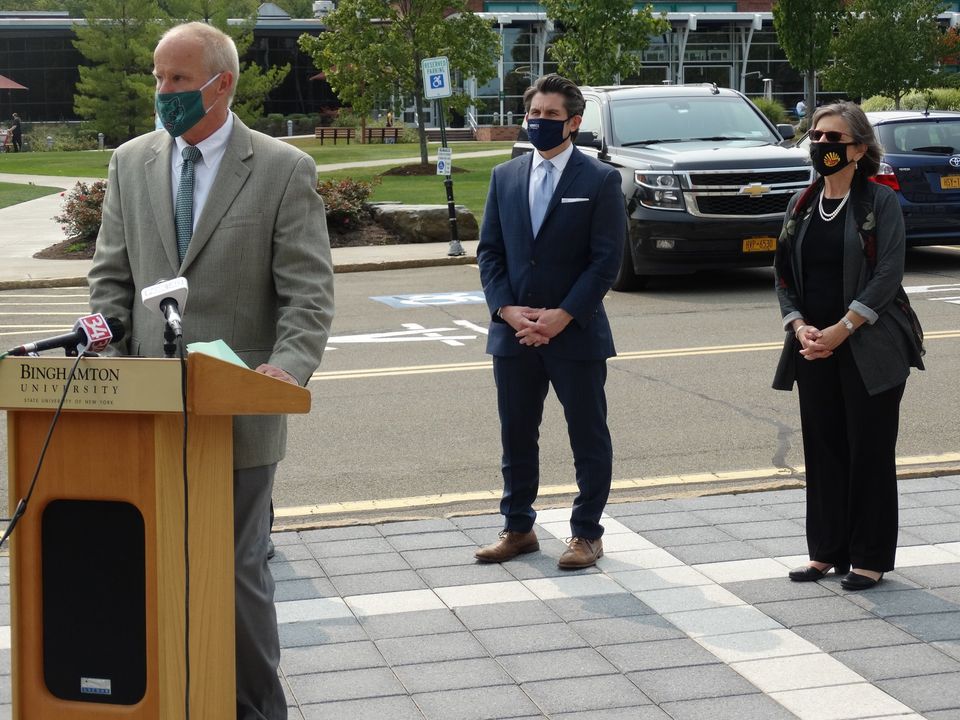 As September began, concerns about the reopening of schools and colleges followed. Locally, Binghamton University and SUNY Broome have worked through the pandemic to make sure the proper protocols were put in place as they welcomed back students from across the country. On September 16th, new SUNY Chancellor Jim Malatras visited both campuses to see how they have been handling COVID-19. The Chancellor called both colleges a “shining example” of how the coronavirus should be handled. Hopefully, they will remain so during this latest spike on infections.

Chancellor Malatras also had an opportunity to tour both BU and SUNY Broome, meeting faculty and students while in town. I spent some time briefing him on a couple of our recent projects: the Nursing and Culinary Schools . The Chancellor is building relationships while assuring communities that he is an active partner, not only in the COVID response, but in the academic endeavor as well. I’ve known the Chancellor for many years through his various roles in state government and look forward to his support for our local institutions.

4. STANDING WITH CONGRESSMAN BRINDISI TO CALL FOR FEDERAL AID FOR OUR COMMUNITY:

We have all seen, and experienced, the financial toll the COVID-19 pandemic has had on our community. Despite the severe impact on their budgets, hospitals, schools, child care providers and local governments have continued to provide the services we all rely on. They are now reaching the point where cuts to these services are becoming a real possibility. I stood with Congressman Anthony Brindisi and a number of other local leaders on September 18th to call on the federal government to pass a new stimulus bill to provide needed aid to our public services. I am also expecting the State Legislature to reconvene to discuss and pass legislation to address the need for relief for non-profits, municipalities, schools, and health care systems and others. Regardless of what happens in Washington, they are relying on us to work together to help. 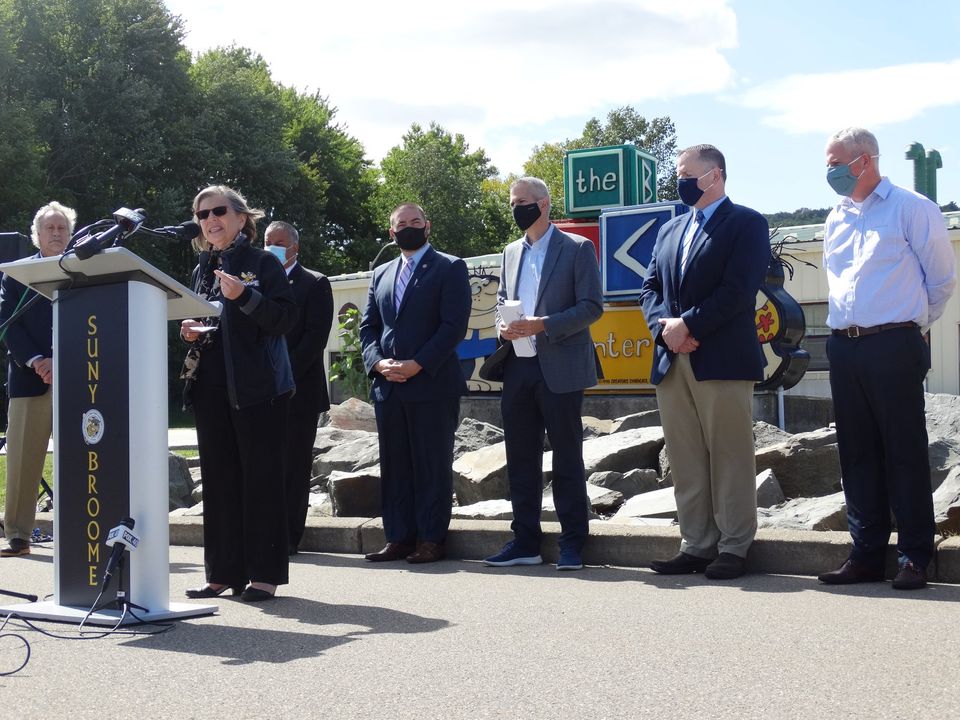 Assemblywoman speaks at a news conference organized by Congressman Brindisi while he and other local elected officials listen in.

Each day, 123 people die by suicide in the USA and it’s the second-leading cause of death for people between the ages of 15-24. September 10th was World Suicide Prevention Day and I joined BC SAFE for their annual local awareness day. This year’s theme was “Chalk the Walk, Have the Talk” which encouraged residents to decorate their sidewalks with messages of hope; chalk art was also submitted as part of a community-wide contest to help raise additional awareness. See below for one of the winning entries and a drawing I also sent in. Thanks to BC SAFE for organizing this effort and for their ongoing work to remind everyone that someone is always there to listen. 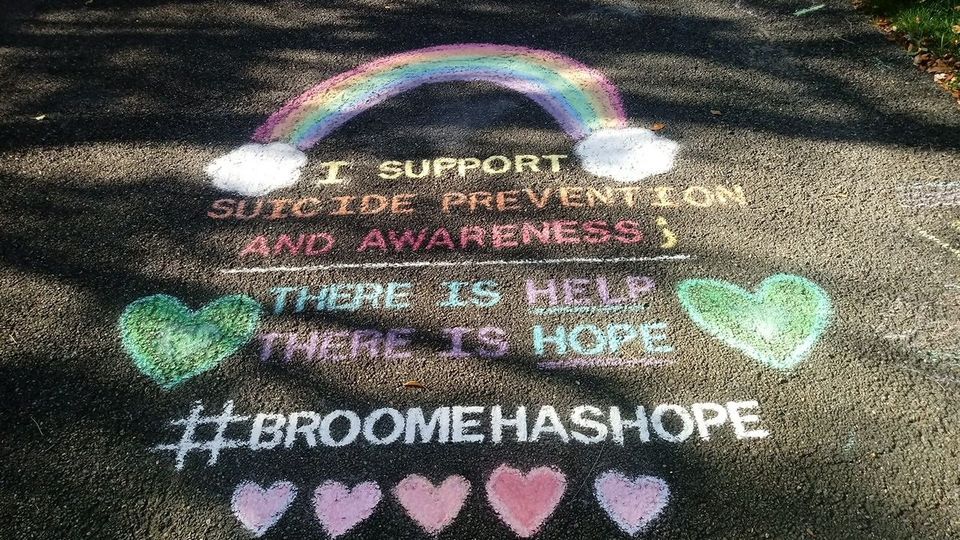 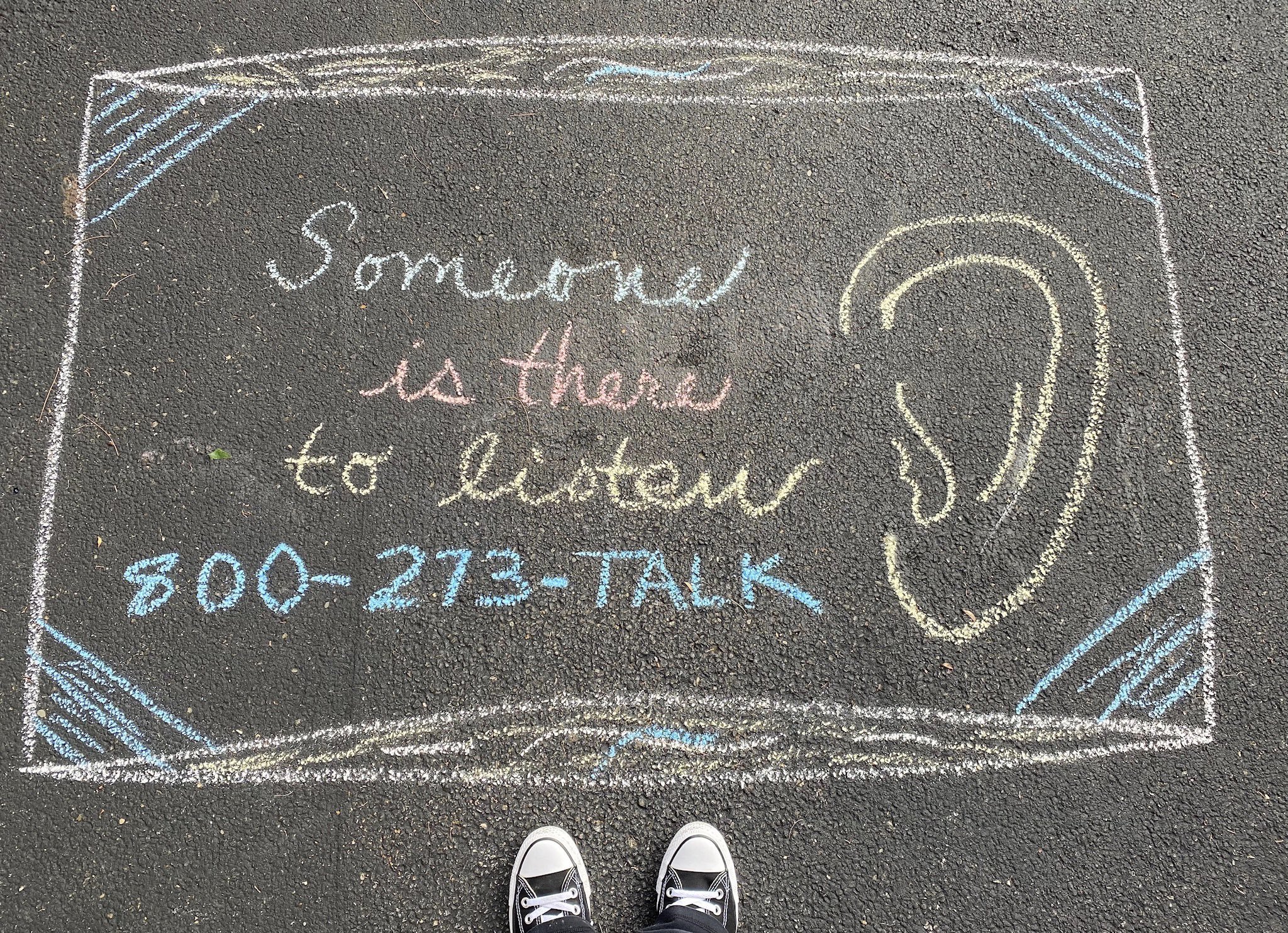