There are 5 statewide ballot propositions up for consideration this year. Below is a summary of each one:

PROP 1: Makes changes to NY’s redistricting process including speeding up the process in which we receive final draft maps, capping the number of State Senators at 63, increasing the vote threshold to pass draft maps when one party controls state government, and ensuring every single resident gets counted for redistricting.

PROP 3: Authorizes the State Legislature to pass a law to allow for same day voter registration

PROP 4: Authorizes the State Legislature to pass a law to allow for no-excuse absentee voting

Here is a link with their text along with a guide to the 5 propositions on the ballot.

For years, the historic Carnegie Library sat empty in downtown Binghamton. Through the efforts of SUNY Broome, Empire State Development and the County, we were able to rehabilitate this historic gem, turning it into a state-of-the-art Culinary & Event Center. This effort took many years of perseverance that certainly paid off. Special thanks to Roger Luther, County Historian for his steadfast commitment to preservation.

On October 8th, we were finally able to officially open this state-of-the-art facility. The Center is providing students with a quality education in culinary sciences and hospitality management along with offering continuing education classes to the community. Additionally, there is an event center that can accommodate up to 150 people.  For more information visit the Culinary Center’s website. 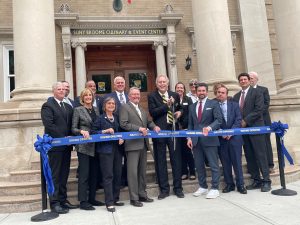 October 25th, I joined Governor Kathy Hochul and other local partners to officially open the new Decker College of Nursing & Health Sciences Building with a ribbon cutting ceremony. This facility, built in 1916 as the Endicott Johnson’s Shoe Box Factory, is now a state of the art 115,000 square foot facility, providing one of the best nursing educations in NYS.

Dean Mario Ortiz provided a tour of the Simulation and Practice Center, one of the few accredited in the Northeast. Decker is truly on the cutting edge of experiential education. To learn more, visit the Decker College’s website. 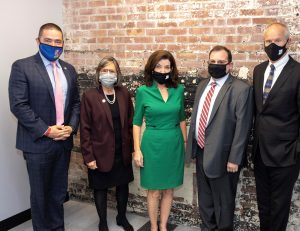 On October 23rd, during Beer Tree Brewing Co’s Harvest Fest, the NYS Brewers Association presented me with their “Support of the Industry Award.” The award recognizes individuals who have helped foster the growth of NY’s craft brewing industry. I was honored to receive this having worked closely with this group for many years. Our efforts have certainly paid off with hundreds of world class breweries operating throughout the state. Through legislation such as the creation of the farm brewery license, we’re working to grow the industry, which is now ranked #2 in the country. 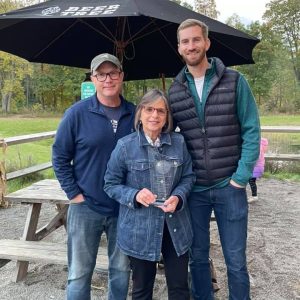 Rod Serling grew up in Binghamton, going on to write and produce The Twilight Zone and many other memorable works. The Rod Serling Memorial Foundation wants to immortalize Rod Serling with a statue in Recreation Park, which is just blocks away from his boyhood home. You can see his connection to this area, and our famous carousels, through episodes of the Twilight Zone such as ‘Walking Distance.” This monument to Rod Serling will serve as a permanent reminder that one of the twentieth century’s greatest writers called Binghamton home. To donate to the kickstarter please visit this link.