On May 22nd, another glass ceiling in state government was shattered when the Legislature appointed Barbara Underwood as New York’s first woman Attorney General. I was proud to vote for her to fill out the remainder of the current term, which expires at the end of this year. AG Underwood was selected as interim Attorney General when the seat became vacant on May 8th. When a statewide seat is left vacant, it is up to the Legislature to select someone to fill out the term. Prior to her appointment, she indicated that she will not run for office in the Fall, so voters will have the task of electing a new AG this November. Her impeccable credentials will serve the office well, providing stability and direction during this time of transition. 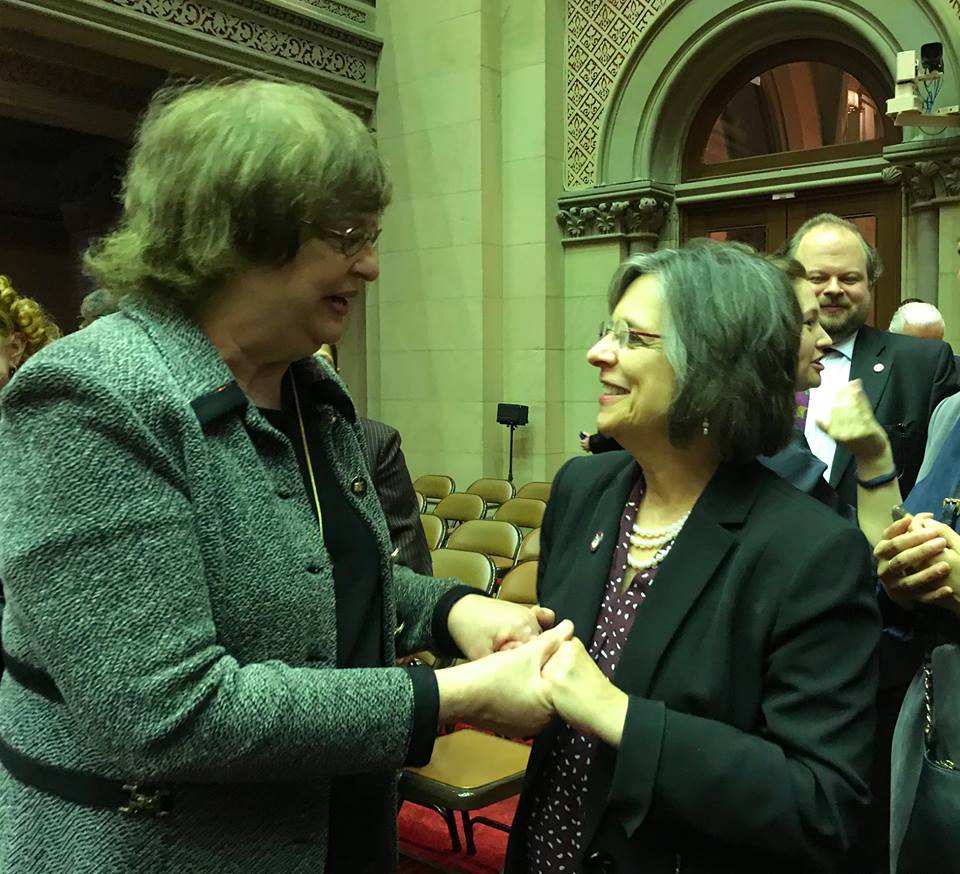 2. SOCKING OUT CANCER IN ALBANY & BINGHAMTON:

On May 8th, I joined Senator Akshar in proclaiming “Sock Out Cancer Day” in the State of New York. Sock Out Cancer supports cancer survivors, patients, and families by recognizing the emotional, mental, and financial burden that is put on families touched by cancer. This initiative provides individuals with non-medical financial assistance for living expenses such as rent or mortgages, groceries, transportation, and more. To show support and help spread awareness, members of the New York State Assembly and Senate showed their support by wearing multi-colored socks, with each color representing the various forms of cancer diagnoses. Benefit concerts featuring William Close and The Earth Harp Collective were held at the Palace Theatre in Albany and the Broome County Forum in Binghamton. Additionally, a portion of the proceeds from this year’s Sock Out Cancer initiative benefited the Bush family, whose son “Super” Cooper recently passed away after a courageous battle with leukemia. 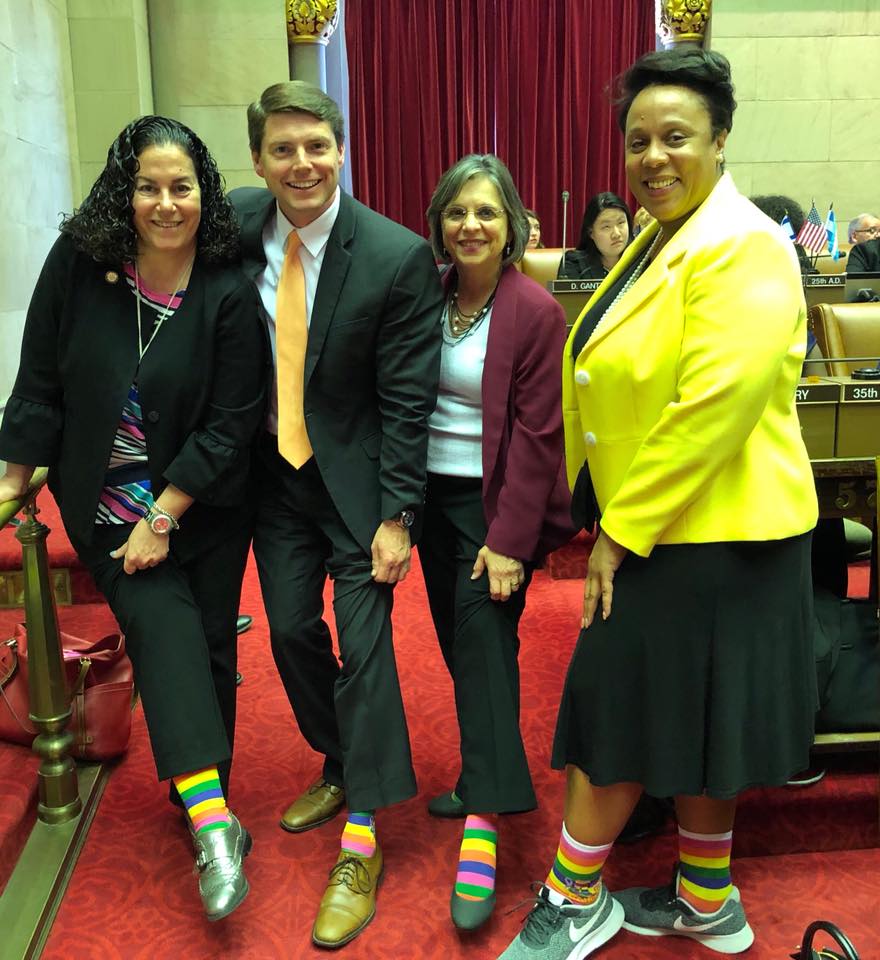 On May 18th, I joined the Vietnam Veterans of America Chapter 896 and other elected officials as a new monument was dedicated at Post 1700 in Endicott. The Silver Rose Monument is a tribute to servicemen and women affected by the chemical Agent Orange in Vietnam. During the war, more than 22.5 million gallons of Agent Orange were sprayed, affecting more than 300,000 service men and women who served during the conflict. The Department of Veterans Affairs estimates that Agent Orange exposure is connected to more than 40 cancers and sicknesses. The Silver Rose not only serves as a way to honor these veterans, but also as an advocacy tool as many Vietnam service members are unaware of the scope of Agent Orange’s effects. Last fall, I helped organize a fundraiser to raise money for the monument; County Executive Jason Garnar was able to provide the remainder of the funding through the County’s Veterans Fund. The monument also raises awareness about other toxic exposures our military members face. 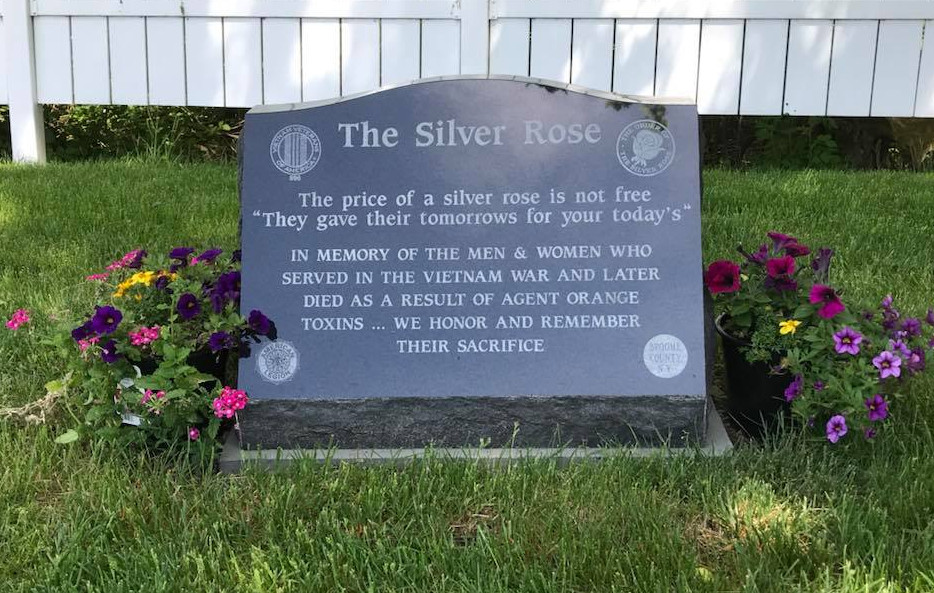 It was a privilege to join the Twin Tiers Honor Flight to Washington D.C. on May 12th. As a salute to their service, 60 veterans were flown to the nation’s capital to visit the monuments and memorials dedicated to them and their fellow servicemen and women. I participated in four “Flags of Our Heroes” ceremonies where I read the biographies of six veterans – including my Dad– who were posthumously honored as part of the trip. At each ceremony a flag was folded and presented to a family member or friend of the deceased veteran. My father was very proud of his service and passed his love of country and public service on to me; it was an honor to be able to pay tribute to him and the other men and women who did not live to receive this special recognition in person. You can read more by clicking here. 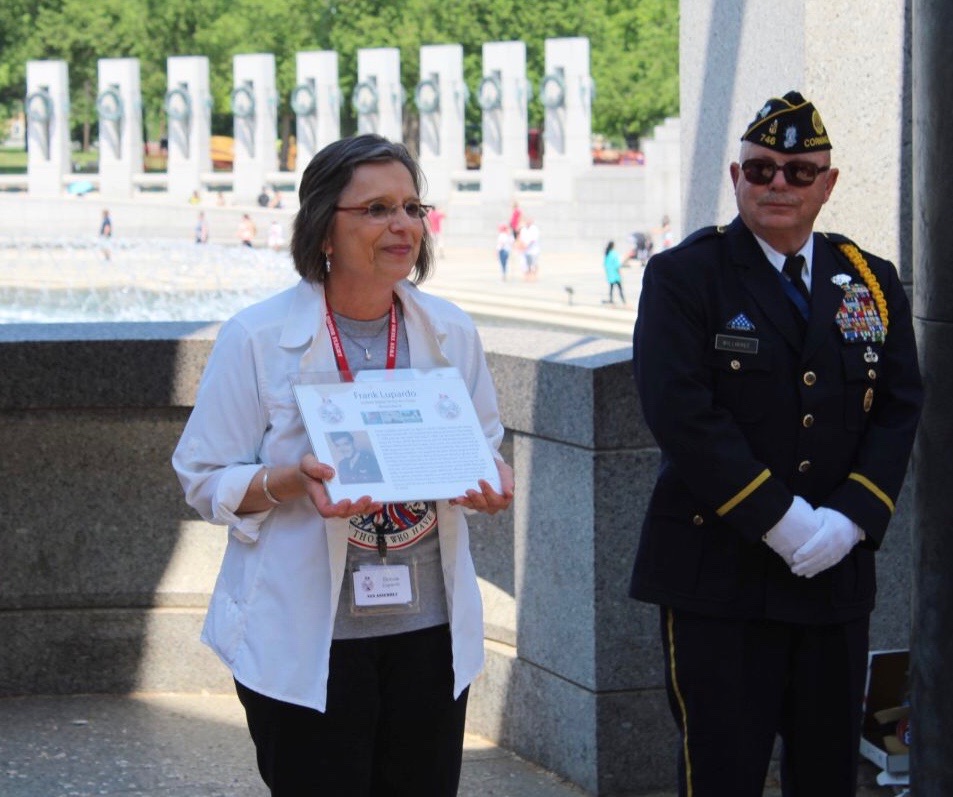 Assemblywoman Lupardo reads the biography of her father, Frank Lupardo, during a ceremony in Washington, D.C.

5. CELEBRATION HONORS THE LADIES OF LISLE:

Over the last year and a half I’ve been working with the Broome-Tioga Suffrage Anniversary Committee, a group I organized with Tioga County Legislative Chair Marte Sauerbrey, to celebrate the legacy of women winning the right to vote in NYS. Last Friday, we gathered in Lisle to once again honor the first women to cast a ballot in the state: the Ladies of Lisle. We officially dedicated a historical marker in their honor and were joined by three grandchildren of the first woman to vote, Florence Chauncey. Afterwards, a walking tour of the historic village was available and two receptions – one “dry” and one “wet” as a tribute to the temperance issue they voted on – were held. French Distillers and Alchemists debuted a “Ladies of Lisle” whiskey as part of the celebration. There are still a few bottles of the commemorative whiskey available, and walking tours can be taken at any time by picking up a brochure at the distillery or at the Lisle Free Library; the guide is also available on the CLIO Walking Tours app. 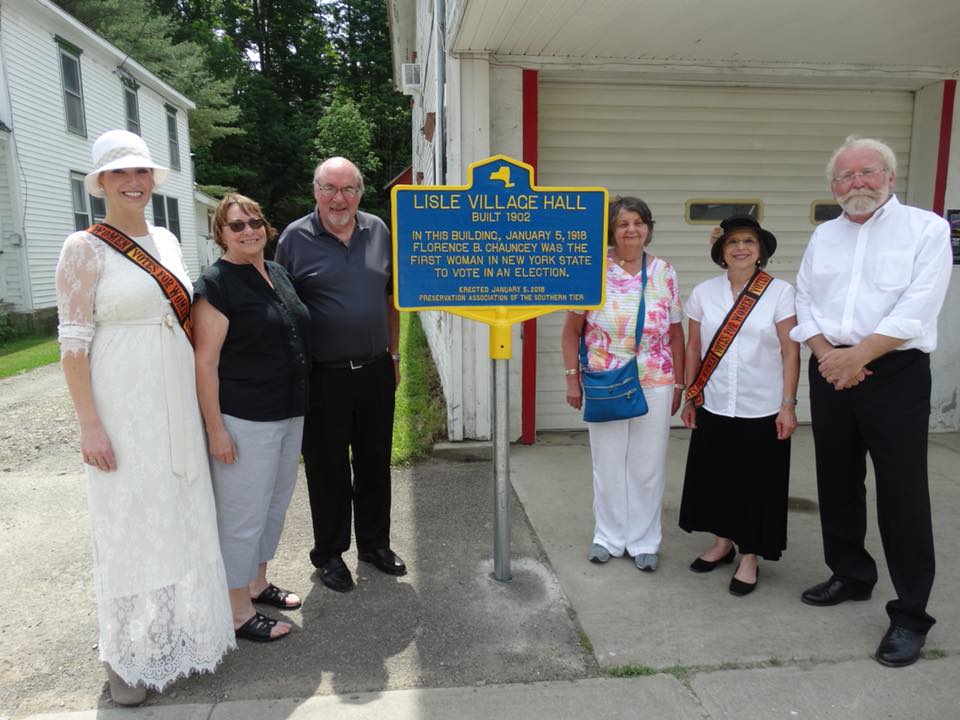