A sign of a growing Village when first built, the Endicott Inn on Washington Avenue has been a symbol of decline for many years now. On February 25th, I joined some of my local colleagues and the Marchuska Brothers as the demolition of this eyesore began. The State and private companies are investing money nearby and business is slowly returning to the Avenue. Events like the Apple Festival and Holiday Magic are bringing new visitors to Endicott’s downtown as well. We often hear stories of the “good old days,” but now people are starting to speak positively about the the Village’s future. Hopefully, this is the sign of good things to come. 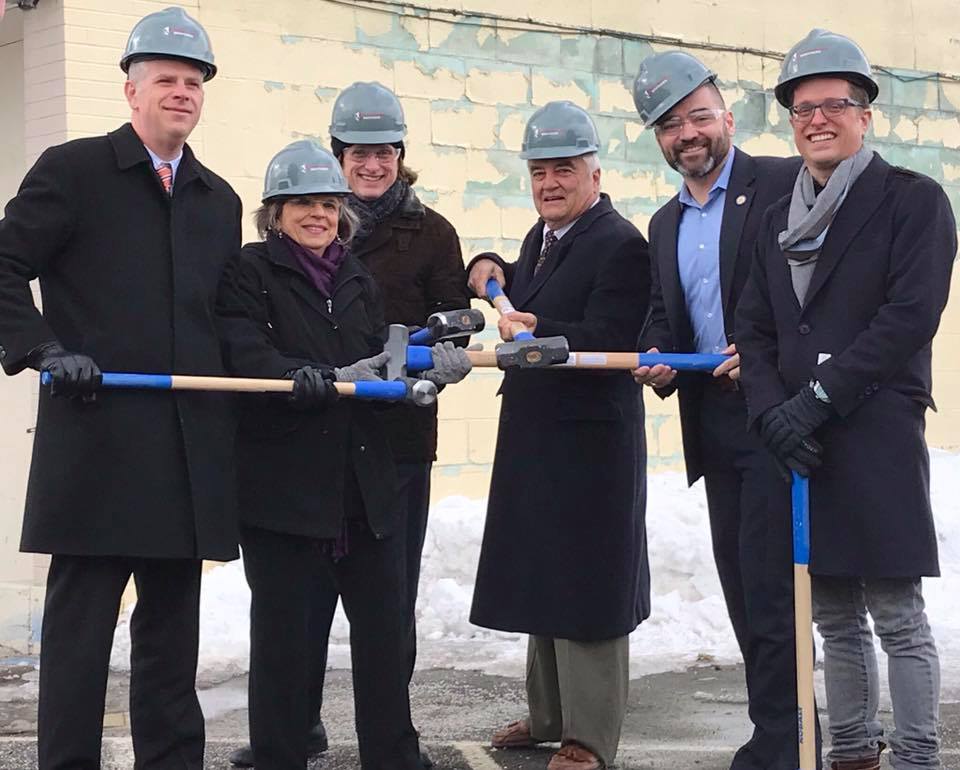 2. MEETING WITH GROUPS AS BUDGET NEGOTIATIONS RAMP UP:

With one month to go until the State Budget is due, I’ve been busy at home and in Albany meeting with a number of constituents and groups to learn about their priorities. As the Chair of the Assembly Agriculture Committee, I’ve spoken with various farm and AG groups, and joined human service advocates to support their calls for increased funding in the final budget. On February 8th, I stood with the #bFair2DirectCare campaign at a rally in Binghamton. This is one of the most recognizable advocacy campaigns in recent years and I am supporting their request for a cost of living adjustment and funding to help increase wages for direct service professionals. On February 21st, I joined several local nonprofit agencies in support of budget funding that would allow them to make critical infrastructure improvements. These agencies provide vital services that government often cannot. 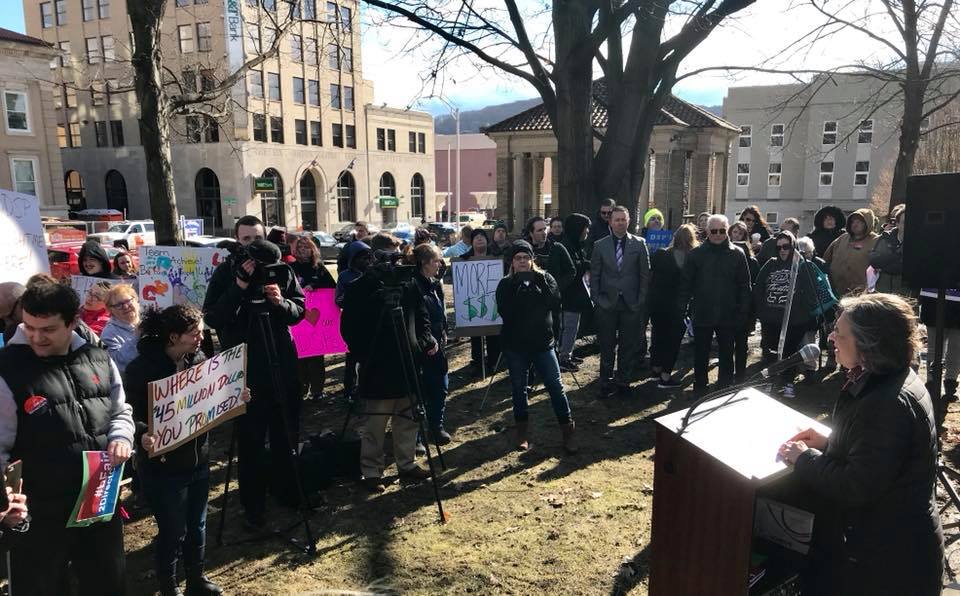 Assemblywoman Lupardo speaks at a #bFair2DirectCare rally in Binghamton.
3. AGRICULTURE AN ONGOING PRIORITY:

In my two months as Chair of the Assembly Agriculture Committee, I’ve been working closely with my colleague Senator Jen Metzger, who Chairs the Senate Ag Committee, to advocate for critical funding that farmers and producers rely on. We toured Cornell’s College of Agriculture and Life Sciences (CALS) on February 22nd to see firsthand the important work they’re engaged in. 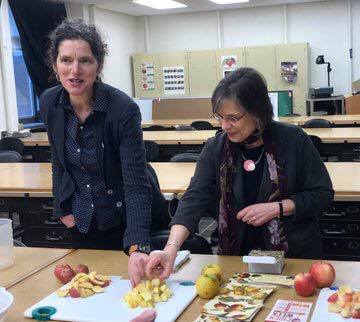 February was American Heart Month and I appeared on Spectrum News’ In Focus segment to talk about the role of local foods in promoting a healthy lifestyle. Eating more fresh food from local producers is an easy way to improve our diets while supporting our local economy.

We also got a preview of how the hemp industry could help transform the region’s economy with an in-depth look at Canopy, one of the hemp processing companies coming to Broome County, from the Press & Sun-Bulletin.

In December of 2017, the World Health Organization and AARP designated New York as the first age-friendly state in the nation due to our efforts to create more livable communities for people of all ages. Broome County’s Office for Aging is seeking input through an online survey to help guide the local planning process. The survey takes about ten minutes and answers will be kept confidential. Click here to access the survey; for those who prefer to fill out a paper copy, here is a list of locations where the survey is available. Two respondents will be selected at random to win a $250 Visa Gift Card. Please call or email the Broome County OFA at 607-778-2411 with any questions.

As January came to a close, so did the 31-year tenure of Broome County Historian Gerald Smith. Gerry decided to finally retire from the position after three decades of dedication to preserving the story of our community. The opening left big shoes to fill, but if anyone is up for the task it is Roger Luther, who was introduced as the new County Historian on February 13th. I joined the County Executive in welcoming Roger to his new role and presented Gerry with an Assembly Citation in recognition of his years of service. I’ve had the pleasure of working with Roger on a number of projects including the 100th anniversary of women’s suffrage in NYS, the Carnegie Library, and the recognition of Civil War hero Col. David Ireland. 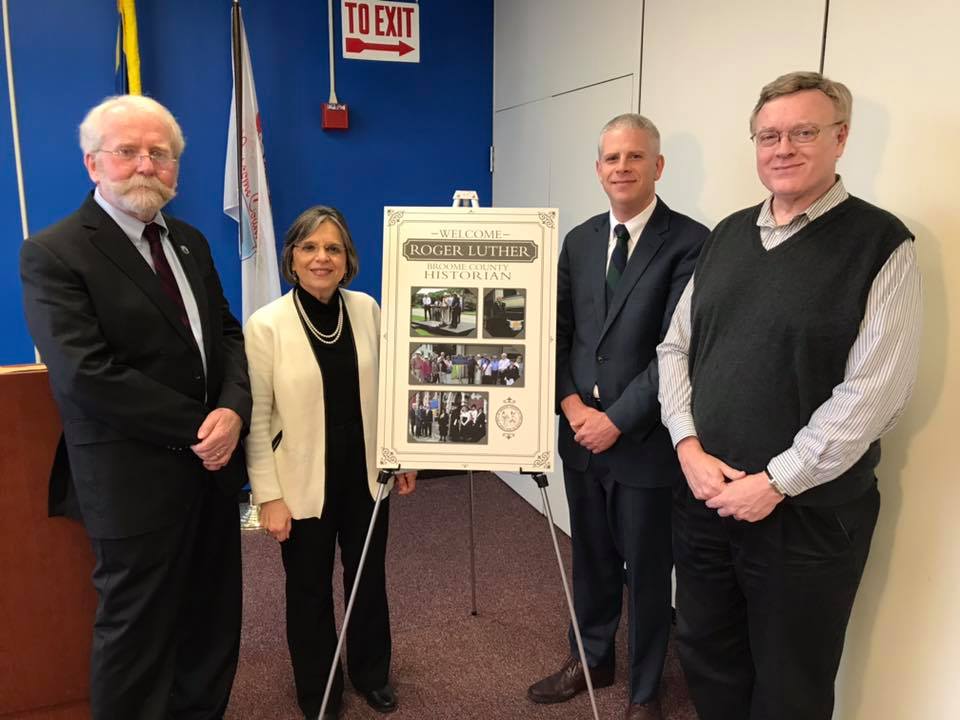