As we gear up for the new legislative session, I wanted to provide an update on the final month of 2015. We will hit the ground running with our first session day on January 6th and the Governor’s combined State of the State and Budget addresses on January 13th. If you have any questions or concerns, please feel free to contact my office at 607-723-9047. Best wishes to you for a happy and healthy New Year.

As you know, the Southern Tier’s Upstate Revitalization Initiative (URI) proposal was named a ‘best plan’ at the December 10th awards ceremony in Albany. This is exciting news and reflects the excellent collaborative work already taking place in the region. The plan expands on the Southern Tier’s strengths and is proof that the region has what it takes to be a leader in rebuilding Upstate’s economy.

The proposal centers around four initiatives that include promoting the region’s culture of innovation, establishing the area as a leader in new food supply and technology, growing the Southern Tier’s advanced manufacturing focus on transportation, and creating three new innovation districts to revitalize our urban cores (in the City of Binghamton, Johnson City and Endicott). For more details, you can view the Southern Tier Regional Economic Development Council’s plan.

Perhaps the most promising aspect of this plan is not the $500 million award, but the private investments that will be leveraged. Successful proposals needed to illustrate a five-to-one private-to-public dollar match, meaning the region will see $2.5 billion in investments on top of the money awarded from the State. This private money will truly help drive this plan and make the Southern Tier’s proposal a reality. 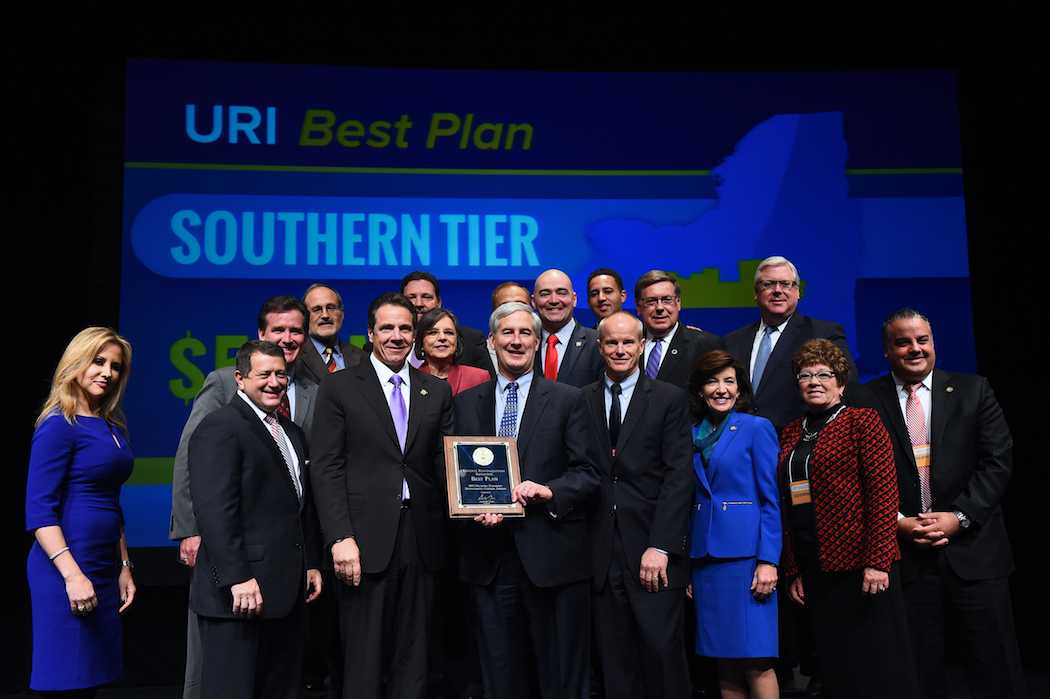 Representatives from the Southern Tier accept the region’s Best Plan Award at the Upstate Revitalization Initiative Awards in Albany on December 10th.

2. Letter calls for increased funding for opioid prevention and intervention

We are unfortunately all too familiar with the opioid epidemic in our community and throughout the state. While progress has been made in raising awareness about this problem, we have to focus on tangible solutions. I sent a letter to the Governor on December 18th requesting increased funding for two proven programs that will help address substance abuse on the front end.

The Student Assistance Program offers counseling and prevention services to students who are at risk of drug and alcohol use. Currently four area districts offer this service; as many as ten districts utilized this program in the past, but lack of funding resulted in cuts at six districts. The Managed Addiction Treatment Services (MATS) program focuses on intensive case management, offering recovery support services as well as help with life skills. Previously offered at Fairview Recovery Services, MATS was successful in improved functioning, longer periods of abstinence, less-frequent relapses, and increased sobriety in pregnant women for its participants. MATS funding for Fairview ended in 2009. You can read more about this letter here.

As Chair of the Assembly Committee on Children and Families, I am working to address the fiscal effects of new mandates to the federal Child Care Development Block Grant (CCDBG). The 2014 reauthorization of the CCDBG by the federal government included several changes to improve the program including amending the health and safety requirements for child care providers, establishing more family-friendly guidelines for eligibility policies, and enhancing parents’ access to information regarding options for available child care providers.

These changes will certainly improve the quality of child care throughout the state, however the State Division of Budget estimates they will cost NYS $90 million; roughly $34 million for mandatory inspections of more than 25,000 facilities statewide, $28 million for training and development for child care staff, and between $24 and $28 million on background clearances. My committee is also calling for a significant increase in funding for child care subsidies to ensure that New York families can continue accessing quality, affordable care for their children. 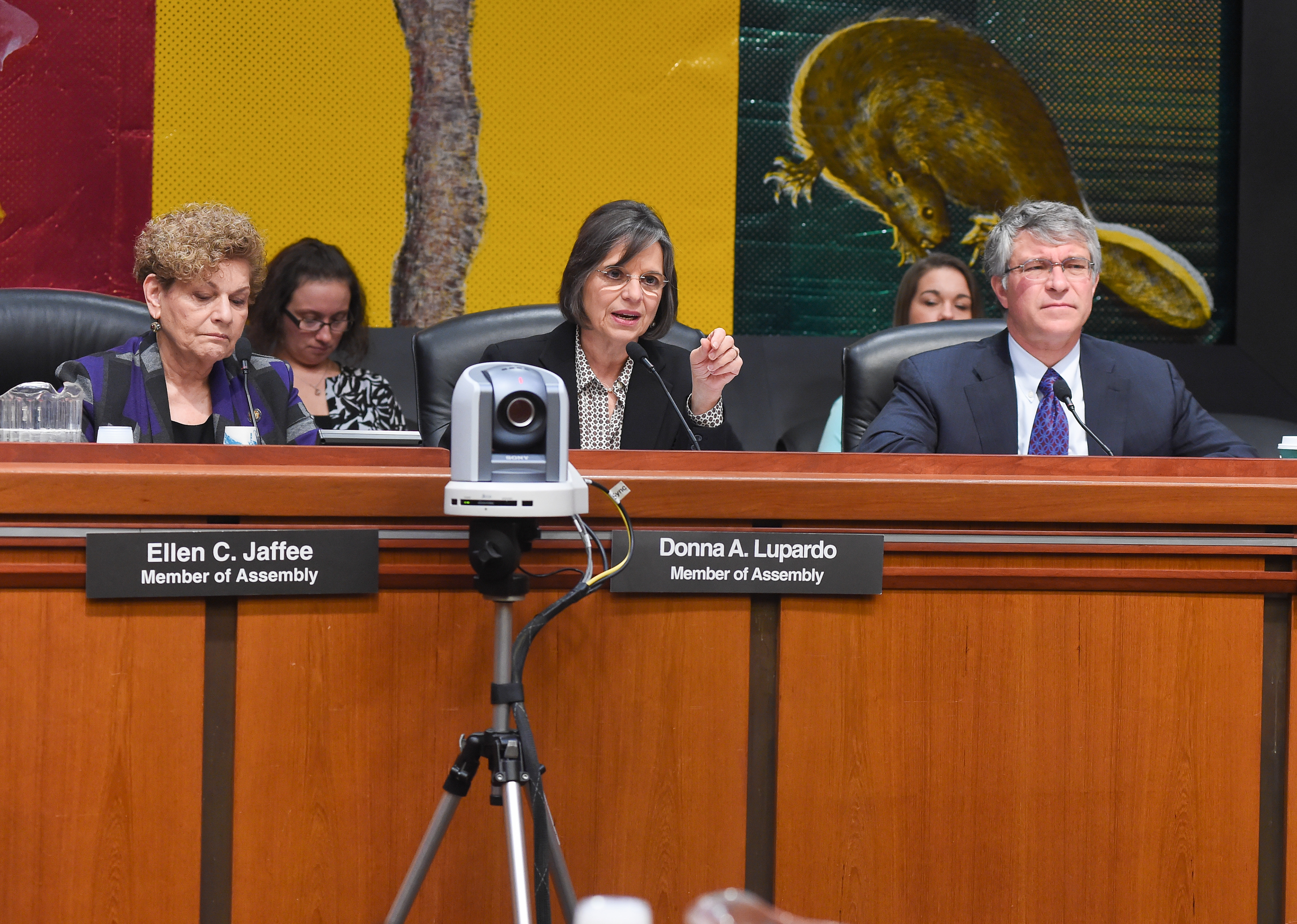 Following the botched roll-out of the Common Core, a Task Force has recommended several changes to the learning standards. On December 10th the group issued its recommendations which include reducing the time spent on testing; updating the standards so they are appropriate based on students’ age, language, and learning abilities; including more tools, training, and flexibility for teacher training; and unlinking student test scores to teacher and student evaluations.

These recommendations are certainly welcome, but we need to make sure that all stakeholders are listened to as we move ahead. I will also continue to advocate for a fairer aid formula and for the funding our schools need.  I am also focused on investments in early learning and afterschool so that children are always engaged.

As the calendar turns to 2016, my colleagues and I will head back to the Capitol for the new legislative session. We will gavel in for the first time on January 6th and the Governor’s combined State of the State and Budget addresses on January 13th will set the tone for the rest of the year.

We’ll know more about the Governor’s budget focus once we see his proposal next week. I expect that ethics reform will be a major item, along with gradually raising the minimum wage. In the meantime, I remain focused on economic recovery, education, energy, agriculture, infrastructure, and issues of concern to children and families.