Protecting our environment and addressing the effects of climate change remains an important priority for me and for most of my constituents. On the climate front, our community has firsthand experience with multiple floods that were supposed to be rare. Local farmers continue to struggle with extreme weather conditions, and many crops have suffered as a result. On June 20th we passed, after many years of debate, the Climate and Community Protection Act (CCPA). This legislation sets important environmental benchmarks, including reductions in greenhouse gas emissions and increases in the use of renewable energy. For example, the CCPA would require the DEC to establish a statewide goal of reducing greenhouse gas emissions by 85 percent by the year 2050. The issue of climate change was a frequent response from constituents who responded to my annual survey this year regarding what the Legislature should focus on. The CCPA clearly sets out ambitious goals, but given the pressing challenge of protecting our planet, it was something we needed to do. Obviously moving ahead, we need to be careful with the way these transitions are managed, controlling costs for the average New Yorker. You can read more about the bill by clicking here.

Speaking of climate change, Lyme Disease has emerged as a major health concern in recent years with 400 people diagnosed with Lyme Disease last year in Broome County alone. Many of my colleagues in the Legislature are working to make sure those living with Lyme Disease and other tick-borne illnesses are receiving the attention they deserve. I cosponsored a bill that passed on June 18th which requires the Department of Financial Services, to study and report on insurance coverage (or the lack thereof) for the treatment of Lyme disease. Many are surprised to learn that health insurance companies are NOT required to cover long-term treatment for those who suffer from chronic Lyme or other tick-borne diseases. This legislation will provide recommendations that will help us make the case that ALL New Yorkers should be protected. I know from personal experience with a loved one how frustrating this process can be; the lack of insurance is hard to fathom unless you have experienced it firsthand. $250,000 was also approved before session ended to support further research, education, and outreach regarding Lyme Disease and other tick-borne illnesses.

New York’s hemp industry has exploded since the Governor signed my first piece of hemp legislation back in 2014. Recently, the federal government legalized hemp in December of 2018, creating even more interest in these products. But while many farmers have chosen to grow a type of hemp that produces fiber and seed, several hundred in NY have decided to grow a variety that produces hemp extracts such the popular cannabidiol, commonly known as CBD. These products are popping up all over the place, almost all with inadequate labels and instructions; many making unsubstantiated medical claims. On the final day of session, the Legislature passed my latest hemp bill, which expands the state’s current law to regulate the production and marketing of hemp extracts like CBD. The legislation would ensure that products are laboratory tested and include labeling that requires a QR code that would provide a link to important consumer information. Because of increasing consumer demand and interest from farmers, processors, and manufacturers, specific guidelines are most definitely needed to guarantee the safety of the complete supply chain. You can learn more about this new bill by clicking here.

While many bills in Albany have a broader impact for residents across the state, each year many others are also introduced at the request of a local municipality. These are called “home rule” bills and require a change in state law in order to let the municipality, including school districts, move ahead with certain initiatives. One such bill that we passed allows Broome County to include a surcharge on cellular and landline services that will allow the County to build a new public safety radio communication system. Currently, Broome County’s emergency communication system consists of 12 different radio systems, many of which have not been updated since the 1970’s. The use of outdated equipment has led to gaps in coverage, which has resulted in first responders not being able to communicate during times of emergency. The County’s Public Safety Radio Capital project will address issues of outdated technology with new radios and radio towers that will allow emergency personnel to better communicate with dispatch and one another.

5. CONTINUING TO ADVOCATE FOR FARMERS & FOOD:

As the Chair of the Assembly Agriculture Committee, it’s my job to work on policies that helps New York’s farms and farmers. The Farm Labor Fair Practices Act, a long stalled bill, passed both houses of the Legislature after years of heated debate. It involves overtime pay for farmworkers after 60 hours, a mandatory day of rest, and other provisions regarding housing and collective bargaining. While the Senate held hearings, I conducted a Roundtable discussion bringing farm and labor advocates together in an attempt to find common ground. While both sides were able to compromise on a number of issues, there were still several provisions that farmers were still not comfortable with. As a result, I voted against the bill when it passed on June 19 and am working to see if the bill can be amended by the Governor. On a more positive note, I introduced and passed a bill to create the Agricultural Investment Task Force. This short term group would examine issues such as workforce development, environmental and climate impacts, and the potential for savings through tax credits, housing funds, energy efficiency upgrades. The goal is to enter next year’s budget discussions with tangible solutions that will help protect and grow our agricultural economy. 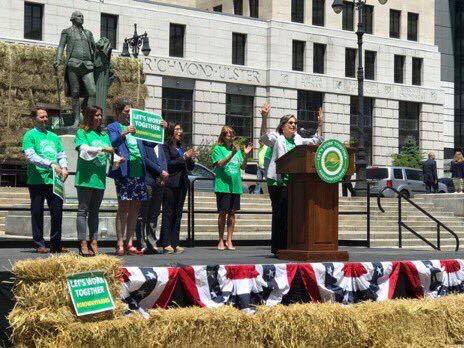 Assemblywoman Lupardo speaks at an agriculture rally at the Capitol.