(Binghamton, NY) – Standing in front of the confluence of the Chenango and Susquehanna rivers in downtown Binghamton, Assemblywoman Donna Lupardo (D-Endwell) confirmed that she will seek re-election to the 123rd Assembly District. The district includes the City of Binghamton, and Towns of Union and Vestal. She will face the winner of a Republican primary that will be held on June 28th.

Assemblywoman Donna Lupardo said, “I’m running for re-election because of my lifelong commitment to the community, my years of experience which are needed now more than ever, and my record of working hard every day for the people I represent.”

Assemblywoman Lupardo is a respected leader at the State Capital, Chair of the Assembly Agriculture Committee and Co-Chair of the Legislative Aviation Caucus. She is a member of the Economic Development, Higher Education, Transportation, Rules, and Steering Committees, and serves as the NY Wing Legislative Squadron Commander for the Civil Air Patrol. She previously Chaired the Committees on Children and Families, and Aging.

Known for her ability to work together across party lines, Lupardo has built a lengthy list of legislative accomplishments. They include the Safe School Drinking Water Act, new Parking Garage Inspection Standards, the Work-Zone Safety Act, along with multiple bills to grow the craft beverage, and industrial hemp industries.

Lupardo has also secured millions of dollars in Southern Tier investments including funding for Binghamton University’s Innovative Technologies Complex, along with their Nursing and Pharmacy Schools, SUNY Broome’s Culinary Arts Center at the former Carnegie Library, and the Agricultural Development Center at Cornell Cooperative Extension, to name a few.

Lupardo lives in Endwell, with her husband Scott J. Peters, a Professor at Cornell University, along with Zuzu, the cat. 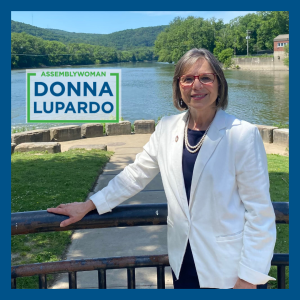