Below are the Top 5 items from November.

On November 15th, I joined the Governor at a ‘topping-off’ ceremony for Binghamton University’s Pharmacy School. We signed the beam that was placed on the top of the building on Corliss Avenue in Johnson City. The Governor also announced that day that $21 million from the Upstate Revitalization Initiative will be used to restore the old Endicott-Johnson box factory to expand BU’s Decker School of Nursing to the Johnson City Health Sciences and Technology Innovation Park. You can read more about these projects by clicking here.

These developments, along with Wilson Hospital and the Goodwill Theatre, are key components of the plan to breathe life back into the downtown part of Johnson City that has been economically depressed since E-J closed its doors decades ago. Like in Binghamton, the presence of additional students and faculty in JC will certainly help other businesses grow there. I am committed to doing all I can at the state level to continue encouraging investments in areas of our community that have had trouble rebounding. 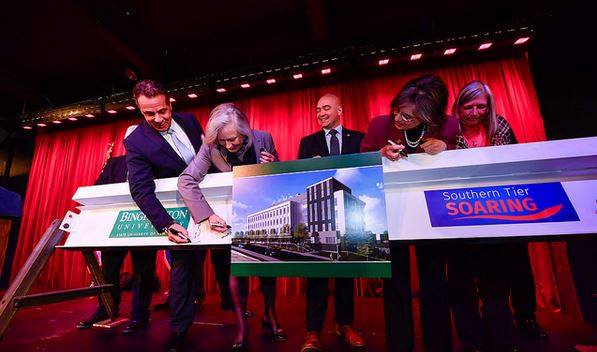 Assemblywoman Lupardo joins the Governor and other local officials to sign a beam that ‘topped off’ the new Pharmacy School in Johnson City.

As you know, it was a busy year in Albany with the passage of a number of bills I sponsored in the Assembly; three of those bills were signed in November. Earlier this week, the Governor signed a bill I introduced that would lower taxes for residents in two cooperative housing units in Binghamton. In 1993, the City of Binghamton passed legislation that created a two-tiered property tax system for homestead, or residential properties, and non-homestead, or commercial properties. These co-op units were classified as non-homestead, despite being residential units, and therefore subject to a higher tax rate. This bill reclassifies them as homestead properties, bringing their tax rate in line with that of their neighbors

That same day, the Governor signed a bill I introduced that would ensure fair contracts for motor carriers. This legislation would remove burdensome liability clauses in trucking contracts, lowering the cost of doing business and growing this industry locally and statewide.

Assemblywoman Lupardo speaks at a news conference in support of a bill to ensure fair contracts for motor carriers.

As these bills were being signed, another bill I introduced was unfortunately vetoed by the Governor. Last spring, I worked with Senator Tom O’Mara to pass a bill that would require regular structural inspections of parking garages throughout NYS. This effort came as a result of a number of issues with parking structures in and around the region, most notably the collapse of a parking garage in Johnson City. We were surprised to learn following that collapse, that while there are regular fire safety and property maintenance inspections required, no regulations existed for structural inspections. Despite his veto, the Governor indicated he is committed to resolving these issues and creating appropriate inspection regulations. I have already begun working with Senator O’Mara and the Governor’s Office to ensure the safety of drivers and their vehicles when parking in these facilities.

4. ‘Flying’ with the Civil Air Patrol

On November 17th, I was honored to join the Civil Air Patrol’s Legislative Squadron as an honorary Major. My interest in aviation stems from my father’s service in World War II. Frank Lupardo was a flight mechanic in the US 13th Army Air Corps and served in the Pacific Theater. After a brief ceremony with the Broome-Tioga Composite Squadron, I showed the cadets of NY-292 some of my father’s military memorabilia. I joined the Squadron once again on November 19th at the Boscov’s Holiday Parade in downtown Binghamton and ‘flew’ in their parade plane as we made our way down Court Street. 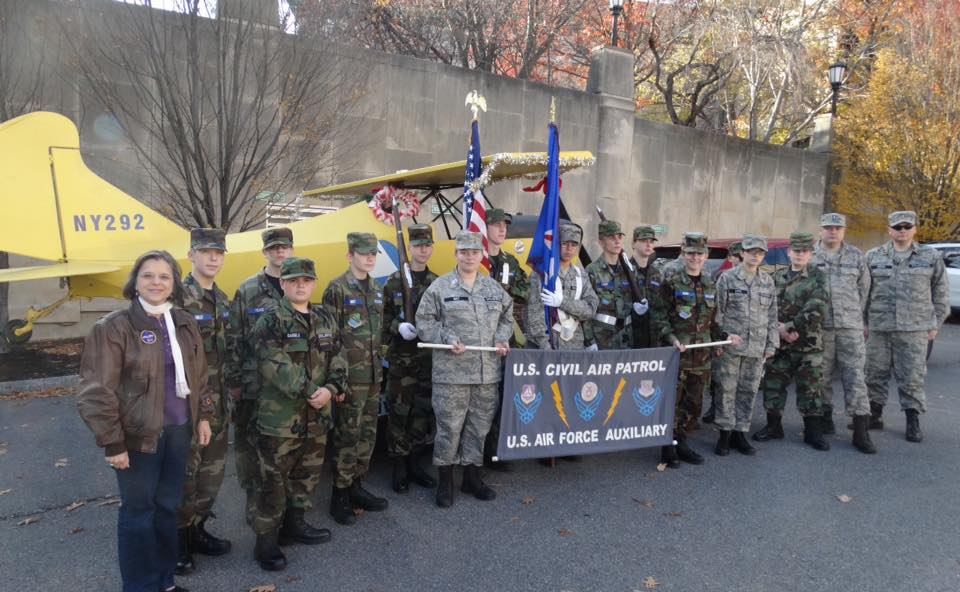 Assemblywoman Lupardo with the Civil Air Patrol NY-292 at the Boscov’s Holiday Parade in Binghamton.

After 1.4 million households received help with heating bills last winter, the Governor announced on November 10th that the Home Energy Assistance Program is once again available to eligible residents. Households can receive a one-time benefit of up to $626, depending on income, household size, and heating source. A family of four can have a household income of up to $53,076 annually, or $4,423 a month, and still qualify for help. To find out if you’re eligible and to apply online, click here.